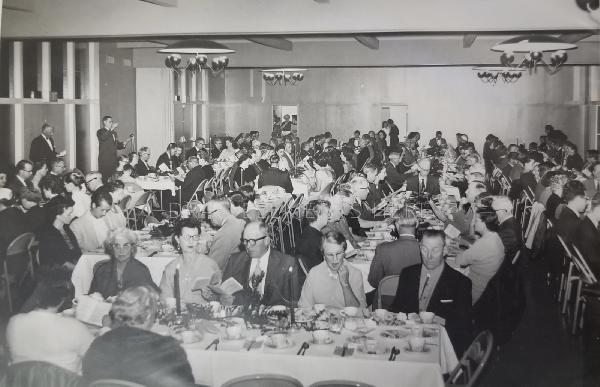 Come, stand at the corner of Morse and Naglee Streets in San Jose, and see the classic sanctuary that is Calvary United Methodist Church. Climb a few steps and open the tall, weather beaten doors and step inside. You are in Calvary’s sanctuary. Ease into a pew and relax, close you ears to the outside world and let your mind transport you to another time, the back to the present. Our pastor has said that there is a sense of energy here, and you will feel it too if you let it speak to you. You may experience the excitement and hear thrilling music of countless weddings; the nostalgic strains of melodies from hundreds of memorial services where mourning families’ grief was left; and, of course, you can hear grand old hymns, sung with gusto-music that continues to spill out from the many worship services that have inspired and energized our congregation every Sunday for more than a hundred years. Tilt your head, and you may hear the lost bars of creation’s imperial music.O for a thousand tongues to sing
My great Redeemer’s praise,
The glories of my God and King,
The triumphs of his grace!

A sense of the past pervades and fills the air. Over a century ago a dedicated group of Christians left us a legacy of inspiration and hope that was to become Calvary United Methodist Church. In 1851, just after California had entered the Union, those early Methodists had a vision of serving the needs of future generations, and began by founding the state’s first chartered institution of higher education, the College of the Pacific. They created a beautiful new neighborhood off the tree-line Alameda in what was then not even an outskirt between San Jose and Santa Clara. They gave the names of the great bishops of pioneering Methodism- Asbury, Taylor, Emory, McKendrie, and Hedding- along with University Avenue and the Pacific train station, to the streets of the new College Park neighborhood. Soon, community-minded Methodists from all over the West began flocking to the college, which occupied what is now Bellarmine Preparatory School, and in 1889, they founded a church to serve the growing community. It was named College Park Episcopal Church and it stood on the corner of Elm and Emory Streets. O Lord my God! When I in awesome wonder
Consider all the worlds thy hands have made,
I see the stars, I hear the rolling thunder,
thy pow’r throughout the universe displayed.

In 1924, the college moved to Stockton, and took with it much of the church’s congregation. But those courageous ones who were left behind prayed, sacrificed and joined together to build a new church with a new mission. They purchased a mustard field from the Quaker Meeting a little farther down Morse Street, and built the structure that surrounds you now. The first service was held in this sanctuary on Easter Day, 1928. The name was changed to Calvary Methodist Episcopal Church; later the word “Episcopal” was dropped as a result of the merger between various Methodist denominations, and finally, with the merger of Methodists and Evangelical United Brethren, the name changed to Calvary United Methodist Church.Because of their faith, the congregation thrived once again and continued to serve its now-burgeoning community. In the 1940s and 1950s the church had outgrown the tiny kitchen, parlor, and classrooms, which still stand next to the sanctuary, and it was forced to expand to meet the needs of the hundreds who were finding a home at Calvary. Adjacent lots were purchased on Naglee and Morse Streets and a building for youth ministry was built. Later, the L-shaped building that includes Strayer Hall and the Christian Education wing, with its beautiful time mosaics, was built.We have few records of those early church members, but we can easily imagine that they were much like our members of today: ordinary people, who shared a dream and a desire to establish a place of worship and mission for the next century- the 20th century. Now in the 21st century Calvary continues to preserve, honor, and extend their rich heritage of worship and outreach for the next 100 years.

then 'Add to Home Screen'